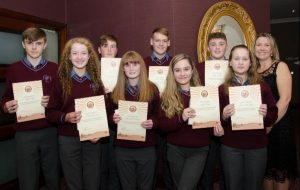 Another very successful CCS Annual Awards Ceremony took place at the Carrigaline Court Hotel on November 8th, and we would like to congratulate all this year’s fantastic award winners, their teachers and families! As always, a wide range of awards were presented, encompassing academic achievement, school attendance, sport, visual art, performing arts, creative writing, science, IT, robotics and much more. Our overall Students of the Year were Meabh Lonergan (Senior) and Rachel Crowley (Junior), while a new Spirit of TY award was presented to Mark Hogan for his contribution to Transition Year. The full list of award winners can be viewed below.

This year’s Hall of Fame Award was presented to our distinguished past pupil, Stephen O’Leary, who is now based in Dublin where he runs his own company, Olytico, is a World Economic Forum Young Global Shaper, and holds a number of Board positions including Dublin Chamber of Commerce, Chambers Ireland, New Ireland Millenial Board and Anu Productions.

We were absolutely delighted to welcome Dee Forbes, RTE Director General, as our guest speaker on the night. Dee is a niece of the late Jim Forbes, who would have been well known to many in Carrigaline, and as the first female head of RTE, is a true groundbreaker. Her inspirational address reminded us all to question what we see and hear in the media today and to replace screentime with real, face-to-face human contact.

Special thanks to our Music Department for their wonderful opening and closing performances on the night, and to all involved in organising the event.