Carrig's Most Definitely Got Talent!!!

Carrig’s Most Definitely Got Talent!!! 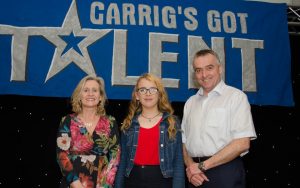 Well done to all involved in a very successful Carrig’s Got Talent which was staged recently at the Carrigaline Court Hotel.

The eleven acts were of a very high standard and included singers, dancers and musicians across a variety of genres.

The first four acts introduced by MC Mr. McCarthy were all from 2nd Year – definitely the most talented group in the school!! First up was Martyna Frankowska with a beautiful solo singing performance, followed by Sam Creamer, who captivated the audience with a wonderful guitar solo. Act 3 was an energetic Irish Dancing group, Celtic Storm, comprising Tianna O’Connell, Niamh Geaney and Sarah Murphy, while Act 4 was a vocal duet by Fionn Mehigan and Lucy Griffin.

At that point, it was time for another year group to have a chance, and Imogen Deady-Walsh (1st Year) wowed the audience with a self-taught performance of Au Clair de la Lune on piano. Act 6 offered us something a little different in the form of an enchanting voice and ukulele duet by talented 3rd Years Ellie Fleming and Danielle Harris-Mulchinock, and then we had our interval act… a very special performance of Wherever You Will Go by Mr. Burke, our Principal!!! The judges, Mr. (Simon Cowell) Ryan, Madame Cholbi and Shauna Nolan, were quite divided on this performance…

After the break, we had a guitar solo from Joe Bosonnet (Transition Year), while Ella Farrell (1st Year) gave a huge vocal performance. Act 9 was another group of 2nd Years, Dance Troupe, with a beautiful modern dance performance which was highly praised by special guest judge, Shauna Nolan, who wanted to join them!

It wasn’t all over yet though… teacher band The Disciplinarians (Mr. Troy, Mr. McCarthy, Ms. Meade, Mr. Manning and lead singer Ms. Ní Bhriain) performed I’m Just a Teenage Dirtbag  to mixed reviews (!!!) followed by wonderful performances from past pupil Kate Fleming and fellow past pupil and Voice of Ireland contestant Shauna Nolan.

When the votes had been counted, Angel Lane proved a popular winner, followed in second place by Ellie Fleming and Danielle Harris-Mulchinock, with our 2nd Year Dance Troupe (Rachel Toomey, Kelsey Turner, Sarah O’Regan, Isabelle Lynch, Taylor Ginn, Emily Curtin and Thea White) coming in third. Well done to all our contestants, and especially to main organiser Ms. O’Regan, her capable assistant Ms. Coughlan, and all who contributed to such a successful event!

Many thanks also to our spot prize sponsors: