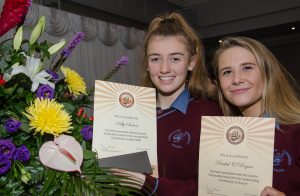 Carrigaline Community School held a very successful Annual Awards Ceremony in the Carrigaline Court Hotel on January 22nd to honour the many outstanding student achievements of the 2016/2017 school year.

MC on the night was music teacher Nicola Cooke, and attendees were welcomed by Una O’Donnell, chairperson of the Board of Management.

Full attendance certificates were presented to those students who had unbroken attendance records for the school year, and there was special mention for Ben Meikle, who did not miss a single day in six years at Carrigaline Community School.

Performing Arts awards went to Sinéad Doyle (Drama) and Orlaith Hickey and Kate Fleming (Music), while Daniel O’Neill won the Visual Art award and Ciara Gavin was the Croí na Teanga recipient. The very talented Chelsea Minehane read her PDST award-winning poem, and there was also recognition for those students who had participated in Gaisce, SciFest, mentoring and literacy, along with the U15 McCarthy Cup winning rugby team.

Guest speaker Olive Loughnane gave a very inspiring address, outlining the challenges she had faced and overcome on her journey as an elite athlete, and making the connection between her own challenges and those that the students present might face in their lives.

The Hall of Fame award was presented to former principal, John Hourihane, and the evening concluded with an address by his successor, Paul Burke.