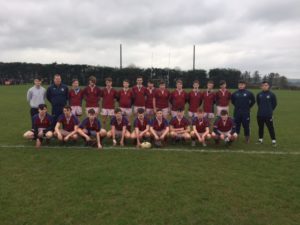 Carrigaline CS won the Munster McCarthy Cup (C) at Under 15 rugby for the first time last Friday, March 10th. They defeated Tralee CBS in an epic battle of tremendous quality in Kanturk RFC. The teams were evenly matched throughout and the half time score (0-0) did not reflect the quality of rugby on show. Carrigaline pushed hard from the outset and were denied on a number of occasions by great cover defence from the Kerry side. Captain, Joseph O’Brien led the charge and was ably assisted by strong carries from Ryan Gardner, Sean Heffernan, Adrian Chosinski and Josh Daly.

The game was played at high intensity on a superb playing surface. Shane Vaughan showed his footballing ability with some well-judged kicks while Gearóid O’Donovan and Adam Morris were tigerish at ruck time. The breakthrough came ten minutes in to the second half when a fantastic chase of a superbly judged kick saw Callum Duncan touch down. This led to jubilant scenes from the large Carrigaline support in attendance.

CCS continued to work hard to maintain their lead while any potential Tralee breaks were halted by hard tackles with Ryan O’Neill, Cillian Drinan and Jack Buttimer particularly prominent. Rory Lynch was outstanding at full back returning all kicks with interest in to a strong wind. Killian O’Sullivan, Thomas O’Connor and Lee Elliffe made a significant impact on introduction while Patrick Mellett ran the show at scrum half.

The cup was presented to Joseph O’Brien by Bertie Smith of the Munster Branch. The victory was fitting reward for the hard work and dedication of a great bunch of lads. The school would like to thank all clubs who provided players for the team but in particular Carrigaline RFC who have put in a lot of effort with many of the players over the last few years. CCS coach DJ Cronin paid tribute to the hard work of the group as the school lifted its second Munster Rugby trophy in five years. He said the availability of the rugby pitch on the school grounds was invaluable in achieving such success.