The match held in the Cashel rugby grounds ended in a dramatic 34 to 31 victory to Carrigaline. Victory was secured with a Sam Healy try in the very last play of the match.

Roscrea began the scoring with a Luke Spencer try which was converted by Fergal Flanagan. Carrigaline responded with a try from Sam Healy expertly converted  from the sideline by Brian Coakley. A strong Roscrea defensive effort was eventually breached by a Killian Fitzgerald try converted by Coakley. Roscrea responded strongly and scored two tries in quick succession both converted by Flanagan. Carrigaline finished the scoring in the first half with a try and conversion by Brian Coakley. The teams were level at 21 apiece at the break and the title was well and truly in the balance.

Carrigaline started the half strongly and concerted pressure led to  a penalty converted by Brian Coakley. Roscrea responded with a well taken and converted try. The large crowd present were now fully involved in what was an incredible contest of open rugby between two very brave, talented and evenly matched teams.  Eoin o Connor was next to act when he made a beautiful sniping break from scrum half to score in the corner and give Carrigaline a narrow one point lead with less than ten minutes remaining. Roscrea were hugely determined to capture the Munster title and concerted pressure led to a penalty converted by Fergal Flanagan. With only two minutes remaining Carrigaline were called on for one last effort and a well placed drop off and committed chase eventually led to the ball being turned over in the Roscrea 22. Quick and accurate passing found the lightning fast Healy who outpaced his direct opponent to score in the corner.

Carrigaline had many stars on the day including Daniel Barry, Josh Cooney, Evan o Connell, Daniel O Reilly, Calem o Brien, Sean Gray, Conor o Brien, Thomas Lysaght and Keelan Daly in the pack. Brian Coakley kicked excellently from hand and placed ball. Killian Fitzgerald was impeccable at full back while Rory Horgan was outstanding in the centre along with the hard work of Dylan Donovan. Caleb o Connell and Sam Healy showed lightning pace when given the opportunity.

The victory was fitting reward for a talented and incredibly brave team and also to the hard work of teachers Nichola Ni Bhriain and D.J. Cronin and Paddy Mullen of Carrigaline R.F.C 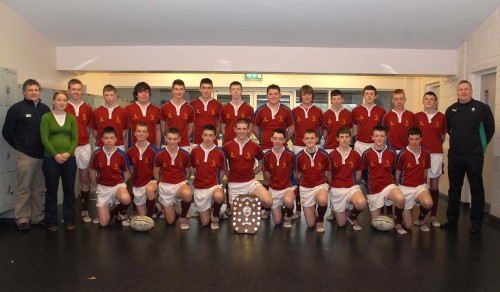 The latest from Carrigs's Got TALENT