Well Done to all 4th Year students who received a certificate having participated in the Scratch programme ‘Having Fun with Computer Programming and Games’.

Scratch is a programming language that makes it easy to create your own interactive stories, animations, games, music, and art — and share your creations on the web.

Congratulations also to Abdullah Mohammad and Fiachra Hurley 4th Year whose game entitled ‘Mem Your Mind’ has qualified for the national finals of the Scratch Programming competition at IT Tallaght next Saturday 21st May. Abdullah’s animation project ‘Shark and Dog’ has also qualified for the competition.

Below are some of the students who received their certificates: 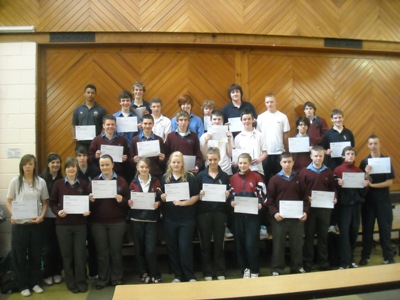 All Ireland Basketball Tournament May 2011